Expecting too much? Only 2 out of 3 package delivery drivers complete their daily route

All the important stats gathered from analyzing almost 1,000 package delivery drivers in the U.S. Including their experiences and insights needed for the job.

With so many people adopting delivery driving as a side hustle or full-time career, the Circuit Route Planner team decided to research their experiences; to help those already in the field and to inform those considering joining.

These heroes delivered necessities like food and medicine when people were unable to leave their homes, or they brought pick-me-ups right to our front doors when spirits couldn’t have been lower.

Yet, even as the pandemic fades (somewhat) into the background of everyday life, delivery roles have not. It’s clearly an effective way to make extra money, gain independence, and help others well into 2022 and beyond.

With so many people adopting delivery driving as a side hustle or full-time career, the Circuit Route Planner team decided to research their experiences; to help those already in the field and to inform those considering joining.

The response was huge.

In this post, we list the most important stats gathered from analyzing the data of over 800 drivers all over the U.S. Including their experiences and suggestions for making the most out of the job.

We then compared their approach with average star ratings of food delivery drivers and annual salaries to paint a picture of the current driver and customer behavior trends today.

Giving drivers tips for the best ways to make money and dispatchers critical insight into how to get the most from their delivery teams.

Keep reading to hear what they had to say 👇

A day in the life of a delivery driver

While the experiences and approaches of the delivery drivers surveyed varied widely, there were some consistent methods for earning more on your routes.

We kicked this study off by first taking a look at which driver behaviours were most likely to result in a higher annual salary. 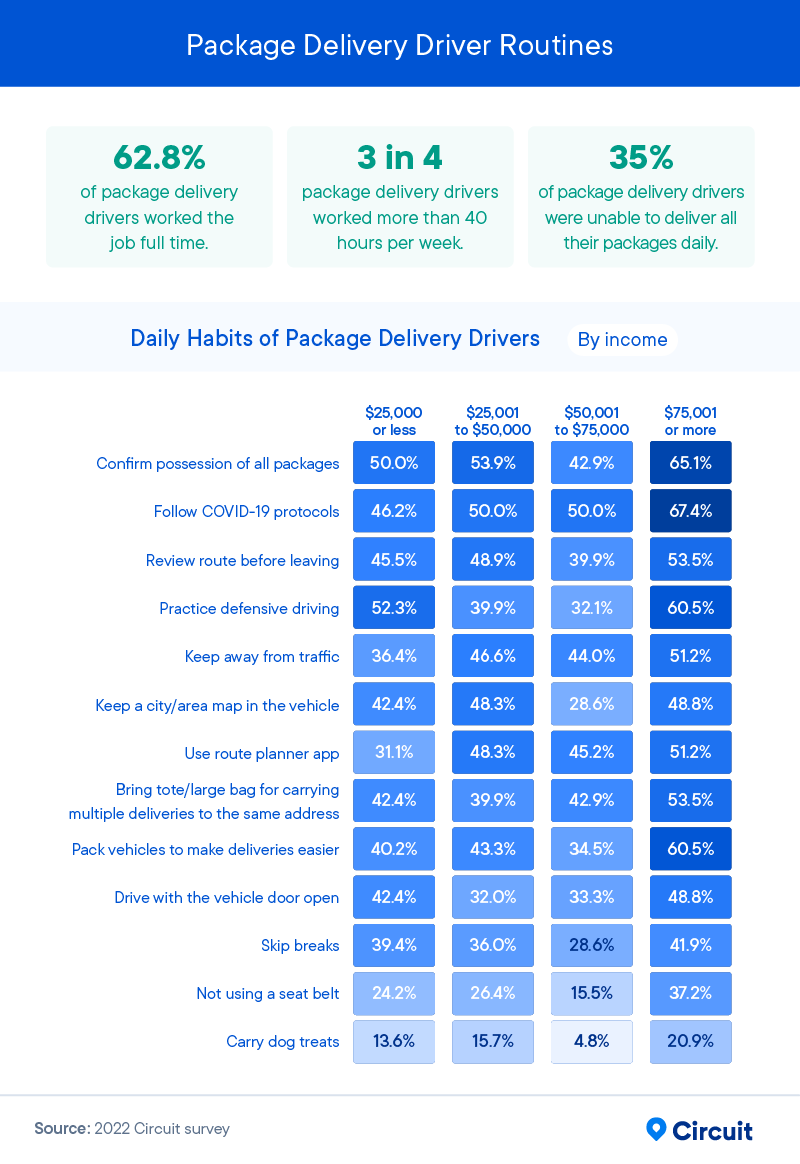 Most delivery drivers were working the job full-time (62.8%). In fact, 3 in 4 respondents worked more than 40 hours every week—roughly six hours more than the average American.

Even with all this time dedicated to the job, 35% still reported that they were often unable to complete their daily delivery route. This is likely a result of the surge in demand for package deliveries, both year over year and particularly since the pandemic’s onset

The next question was whether the time put in was worth it. For those earning upward of $75,000 annually, the answer was likely yes.

But, not everybody was able to earn so much. Delivery drivers who made the most money were more likely to report preparing for success by planning ahead—either by reviewing their route before leaving or using a route planner app.

This high-earning group also followed COVID protocols more often than other income levels. Another sweet-side to this higher-earning group was that over one in five of them carried dog treats with them along their route. While this is an unnecessary habit, this kind of behavior could help a driver gain some positive recognition from their customers.

Key takeaway: If drivers follow the COVID guidelines, they should avoid the virus as a result. So they can avoid being sick and not earning money.

In spite of the enviable salaries drivers could earn, there are certainly some downsides to the trade. We asked drivers to share the worst parts of their job and then offer their most valuable tips for new drivers.

Customers not being home or not opening the door was more exasperating for drivers than anything else—even rude customers or a nonexistent address.

Another annoyance came from recent social media trend asking delivery drivers to dance for the surveillance cameras, which is then posted online.

If your plans change, it’s always better to let your delivery driver know. Using a package tracking app allows you to stay up to date on where your delivery is at, to make sure that someone will be home to accept whatever you bought.

According to the most well-paid couriers, planning ahead is critical for avoiding bad experiences.

Mapping addresses before the day began was the most common piece of advice offered by 82.8% of respondents.

Just under 80% also said drivers should use electronic proof-of-delivery tools to prove that their customers received the item. (So they cannot be held accountable if the customer claims something different.)

New drivers were also commonly advised to check for damaged packages before dropping them off and give live estimated times of arrival (ETAs).

Key takeaway: Mapping out the route before leaving for the day was the most important advice given by experienced delivery drivers.

The average commuter in the U.S. spends somewhere between $2,000 and $5,000 on travel costs annually, depending on the state.

On the other hand, delivery drivers spend an average of $6,500 total on overhead costs each year.

Almost all of these expenses are related to their nonstop “commutes.” Half reported using their own cars. They also told us that the gasoline from constant roaming, insurance costs, and vehicle maintenance also increases when driving more often.

Estimates vary widely on how quickly people will adopt electric cars as their primary vehicles. Still, delivery drivers will likely be motivated early users, considering how much money they could save on gas in the long run. For now, their top vehicle brand preferences were Toyota and Honda.

Key takeaway: Delivery drivers that use their own car drive fuel-efficient vehicles to reduce their overhead costs.

Food with a short shelf-life have their own host of challenges to deliver them properly.

Most of the time, food needs to be delivered as quickly as possible, to make sure that the customer receives a hot meal. In the last section of the study, we looked at drivers’ tips and tricks for delivering food well and how they can make the most money from it.

Better ratings mean better tips. Though neither were that easy to come by.

Only one-third of delivery drivers enjoyed the maximum five-star rating and the increase in tips, compared to four-star drivers. And the more stars a driver had, the more steps they were typically taking.

Delivery drivers with five stars were much more likely to report double-checking orders before delivering or messaging a client ahead of time. Five-star drivers also reported following COVID protocols more often than other drivers.

This is a critical point of interest for those ordering takeaway food. Considering that the recent surge in food delivery orders was largely inspired by a desire to socially distance and stick to pandemic regulations.

One way to increase tips and star ratings was simply to enjoy the driving experience.

Five-star drivers listened to music (55.4%) or the radio (41.7%) more often on their routes than those earning four stars or fewer. Perhaps this improved their mood enough to leave a lasting impact on the customer. After all, being friendly was deemed the No. 1 way to increase tips.

Key takeaway: To maximize tips, food delivery drivers were advised to be friendly, and double check their orders.

Drivers doing the best they can

In this survey, delivery drivers of all kinds—whether they were handling packages, takeaway food, or fragile items—came together to share their knowledge and wisdom.

While they divulged that things weren’t always easy (customers often weren’t home, packages were damaged, and overhead costs could be high) there were also many ways to save money and increase tips that could be learned with experience.

Over 50% of the top-earning drivers we surveyed saved time and money and enjoyed their jobs more by using technology to plan their routes in advance.

Circuit Route Planner is a route optimization app made just for delivery drivers to help them save time, make money, and finish work faster.

Ready to get back out there and start making the most from your deliveries? Help others feel the same way by sharing this information. Just be sure your purposes are noncommercial and that you link back to this page.

Join our newsletter! We write regular articles that help drivers and businesses become better at all things delivery.

You made it this far!

Chances are you'll love our other stuff too. Join our newsletter to get the freshest articles on all things delivery.

Take the stress out of planning your routes with Circuit Route Planner.Try free nowTry free now

Heather Reinblatt is a managing editor currently living in St. Louis, Missouri. She spends her free time reading, trying new recipes, and cuddling her cat Paisley. You can find Heather on LinkedIn.

Take the stress out of planning your routes