What is financial infidelity and why are couples hiding purchases from eachother? We surveyed over 1,000 Americans to find out.

Ever had someone dash toward you to intercept a package delivery? Breathing hard, talking fast, shifty eyes—you’ve probably seen it all before. Chances are they were trying to hide an online purchase from someone else at home.

People often hide purchases for a good reason, like when it’s a holiday or birthday gift. But, when secret spending and lying about money happens between partners, it’s a type of cheating called financial infidelity.

To help drivers understand what motivates their customers’ need for private deliveries, we surveyed over 1,000 Americans in committed relationships.

Here are the most interesting connections we found between secret spending, relationships, and deliveries.

Financial infidelity: Who are the secret spenders?

It’s likely that most of us have been guilty of financial infidelity at some point.

Our study revealed that almost 8 out of 10 Americans have hidden a purchase from a partner–and parents (82.9%) were worse offenders than couples without kids (68.9%).

We also noticed that those who reported secret spending were less happy in their relationships than those who were honest about their money habits. 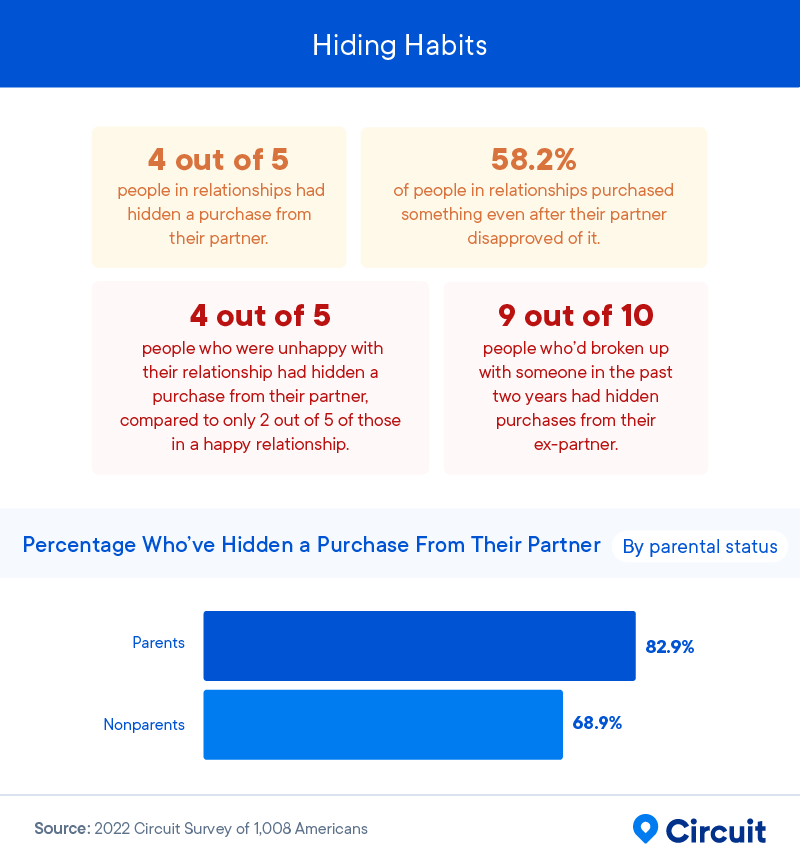 Lying about money matters can lead to distrust, debt, fights, and, often, relationship trouble as a consequence.

We found that 4 in 5 people who were unhappy in their relationship had hidden purchases from their partner, compared to just 2 in 5 of those who were happy.

As mentioned previously, parents were more likely than those without children to hide purchases from their partners. Perhaps affection drives parents to buy items that their children want or need, even when they cannot afford them.

Secret spending also led to breakups: An astonishing 90% of those who had broken up with someone in the past two years admitted to hiding purchases from their former partner.

If the effects of secret spending are so negative, why do so many Americans commit financial infidelity? Let’s talk about that next.

Key Takeaway: Hiding financial purchases can harm your relationship; almost all couples that broke up in the past two years had hidden purchases from their partners.

Lying to a partner isn’t healthy and could lead to some pretty bad consequences. So there have to be compelling reasons for risking it.

Here are some of the motivations your customers may have for keeping what they ordered under wraps. 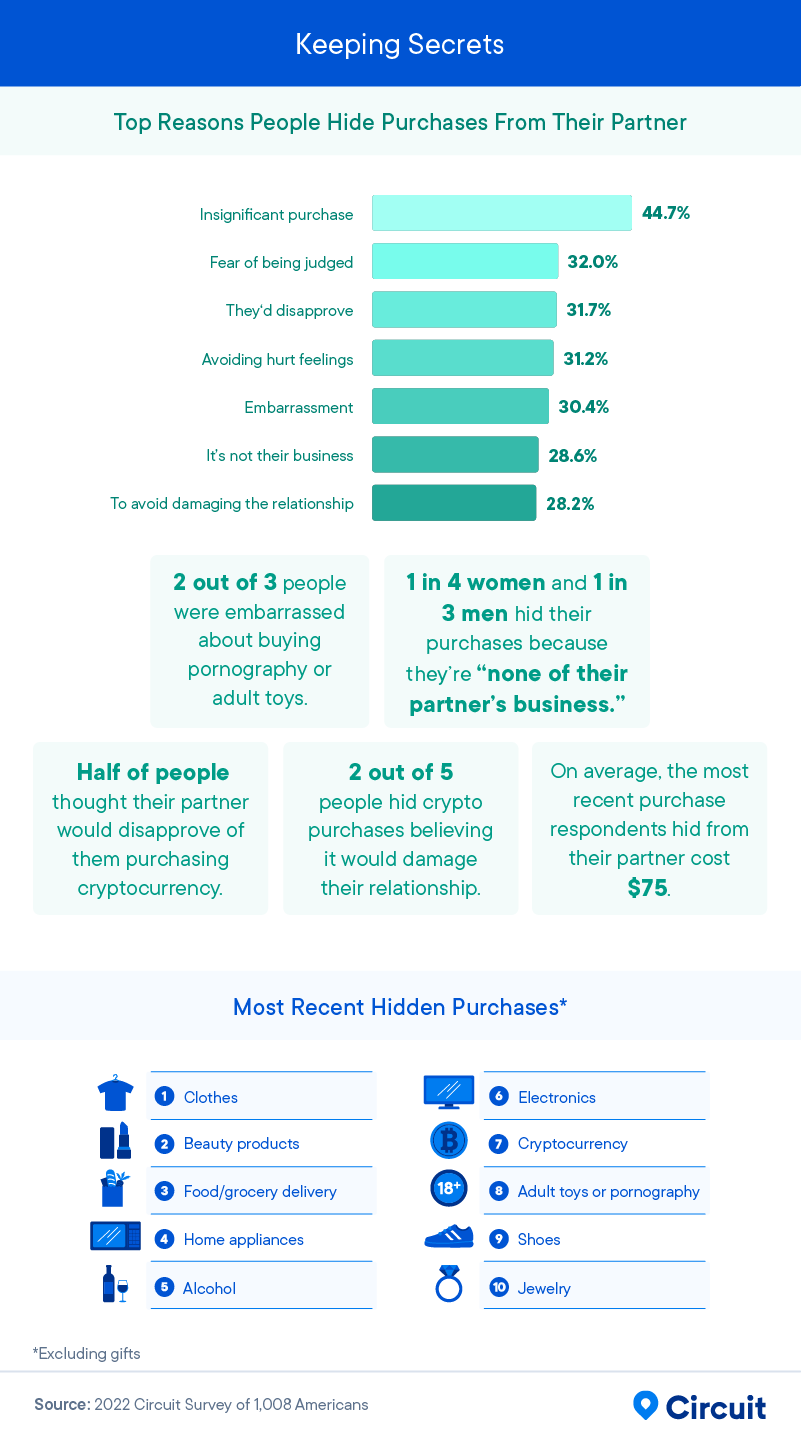 The good news is that the most common reason for not telling partners about a purchase was because respondents felt the cost was insignificant.

People also chose to keep purchases to themselves if they thought they might hurt feelings or damage their relationship in some way.

We also discovered that men were more likely than women to think that their spending was simply none of their partner’s business.

Some people just wanted to dodge any negative reactions their partner might have.

Around 30% of Americans worried about discovering an item or its price kept deliveries private because they feared judgment, disapproval, or embarrassment.

Key Takeaway: Most people that hid purchases thought they were unimportant. But, embarrassment and fear of being judged were also strong reasons for hiding them.

Hiding deliveries became more challenging when the pandemic triggered lockdowns across the U.S. 38% of secret spenders turned to special delivery requests to hide a purchase. Meanwhile, 25% admitted to intercepting their delivery driver. 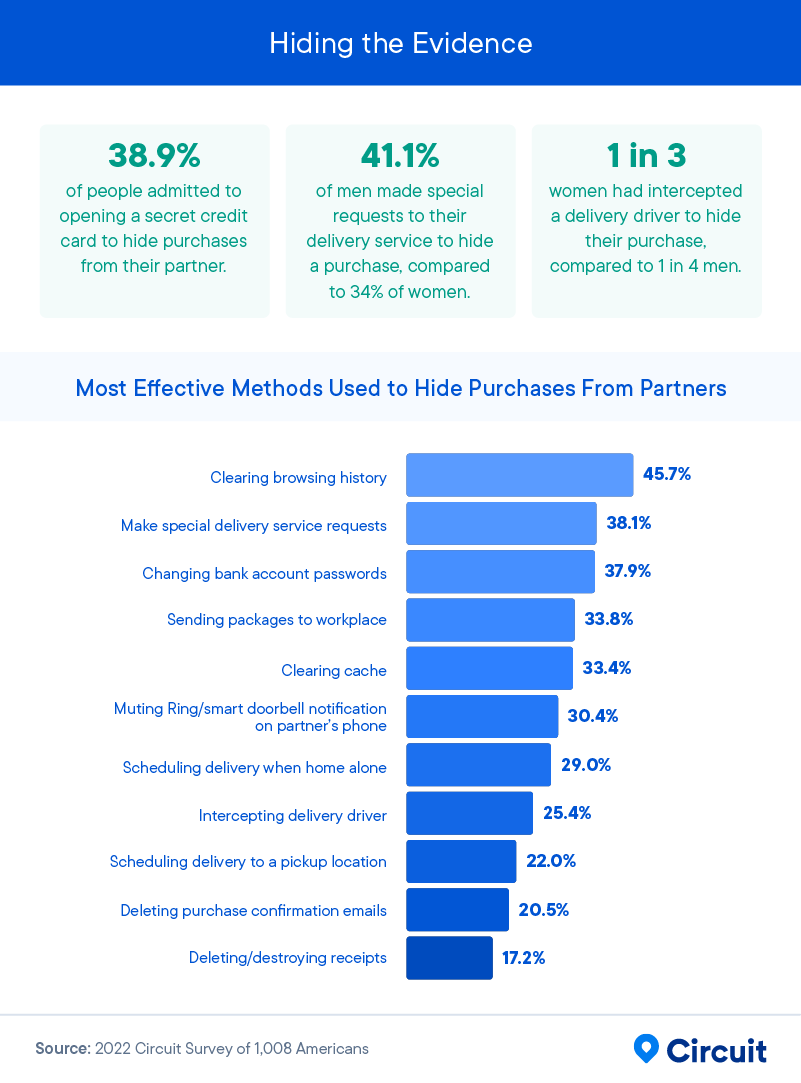 While both men and women admitted to secret spending in the past, we found a key difference between the sexes when it came to delivery choices.

Twenty-two percent of people chose to divert deliveries to a drop-off point other than their home or workplace.

These lockers are private, safe, and convenient for customers. They’re also super useful and time-saving for drivers, who can pick up and drop off many deliveries at once. It’s a win-win situation.

Key Takeaway: Adding special requests for delivery drivers is a good way to keep your partner from knowing about a secret purchase.

Americans love online shopping, with more people than ever needing delivery. As e-commerce grows, skilled and knowledgeable drivers are likely to be in high demand.

This study uses data from a survey of 1,008 people in a relationship in the United States. Respondents were aged between 19 and 72 years old with an average age of 33. 52.3% of respondents identified as men, while 47.7% identified as women.

We’re hope you found our research so interesting that you’d love to tell others about it. Feel free to share any of the information above; however, we ask that you please do so for noncommercial purposes and to link back to this page to give credit to our work.

Join our newsletter! We write regular articles that help drivers and businesses become better at all things delivery.

You made it this far!

Chances are you'll love our other stuff too. Join our newsletter to get the freshest articles on all things delivery.

Take the stress out of planning your routes with Circuit Route Planner.Try free nowTry free now

Heather Reinblatt is a managing editor currently living in St. Louis, Missouri. She spends her free time reading, trying new recipes, and cuddling her cat Paisley. You can find Heather on LinkedIn.